Required cookies are essential to let you move around the website and use its features, such as accessing secure areas, shopping baskets and online billing. These cookies allow our website to provide services at your request.

Functionality cookies are used to remember the choices you make, e.g. your user name, log in details and language preferences. They also remember any customisations you make to the website to give you enhanced, more personal features.

Targeting cookies collect information about your browsing habits to deliver adverts which are more relevant to you and your interests. They also measure the effectiveness of advertising campaigns.

This site uses cookies and related technologies for site operation, analytics and third party advertising purposes as described in our Privacy and Data Processing Policy. You may choose to consent to our use of these technologies, or further manage your preferences. To opt-out of sharing with third parties information related to these technologies, select "Manage Settings" or submit a Do Not Sell My Personal Information request.

Volvo Cars reveals the S90 Ambience Concept, which is an industry-first sensory experience that sychronises visuals, sound and scent to redefine in-car luxury.

The S90 Ambience Concept was revealed at the Beijing Auto Show China and is based on Volvo's S90 Excellence three-seater saloon and focuses on chauffeured passengers in the rear seat.

Passengers can personalise the car's atmosphere by using intuitive smartphone app to chose one of seven visual themes synchronised with audio & scent. The visual element transforms the car's ceiling according to the selected theme, which includes: Northern Lights, Scandinavian Forest, Swan Lake, Archipelago and Rain. There is also a Nocturnal theme for resting, while Freedom gives a boost of fresh and uplifting energy. Each theme is matched with one of four bespoke scents, which deploys simultaneously from a portal in the centre console. 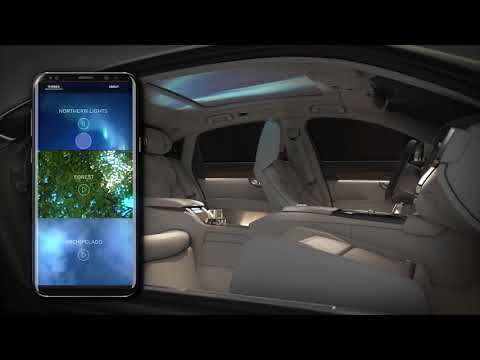 Whatever your question or feedback we are here to help. So please feel free to contact us

Immerse yourself even deeper. Visit our social channels

Company Info
Back to top

Reg Office: Lipscomb Cars Ltd 3-4 Bower Terrace, Tonbridge Road, Maidstone, Kent, ME16 8RY
Registered in England: 3165756
VAT Reg No: 662 0113 79
Financial Disclosure
Lipscomb Cars Limited is an appointed representative of ITC Compliance Limited which is authorised and regulated by the Financial Conduct Authority (their registration number is 313486). Permitted activities include advising on and arranging general insurance contracts and acting as a credit broker not a lender.

We can introduce you to a limited number of finance providers. We do not charge fees for our Consumer Credit services. We may receive a payment(s) or other benefits from finance providers should you decide to enter into an agreement with them, typically either a fixed fee or a fixed percentage of the amount you borrow. The payment we receive may vary between finance providers and product types. The payment received does not impact the finance rate offered.

All finance applications are subject to status, terms and conditions apply, UK residents only, 18’s or over, Guarantees may be required.
Back
Book A Service
Vehicle Valuation
Compare Saved Vehicles
Top
Close